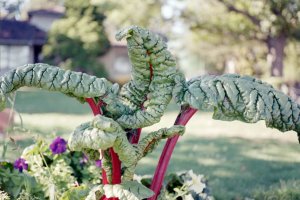 As a novice gardener, I first learned about organic gardening in 1972 from a friend, back issues of Organic Gardening Magazine, and a lot of experimentation.

One of my favorite photos from our NE Portland home shows me grinning from ear to ear, carrying armloads of three and a half foot long and two feet wide Swiss chard leaves. I was dwarfed behind those giant fronds. An old septic pond in the back yard seemed to have some ancient fertilizing properties still remaining from 30 or 50 years ago. Or maybe it had been biodynamically treated?

Ten miles to the south and five years later, I was living in a side-by side four plex, just a few blocks from a community garden at Colonel Summers Park, in SE Portland. Citizens could rent a 20’ x 20’ plot. The city would till the soil in the spring, provide the water and minimal rules, and each renter could garden according to her taste. I shared my plot with Meredith, who also lived in the neighborhood. Ours was located on the southern edge of the park, boundaried by a residential section on the west, conveniently away from the traffic on 20th Ave.

I read about the Findhorn Gardens, and the cooperation between humans and the plant kingdom that produced 40 pound cabbages and roses that bloomed in the snow. It seemed as if I was personally present and hearing the devas speak through Dorothy Maclean, one of the founders of Findhorn. I also read Kinship with All Life by J. Allen Boone, and realized those flowers and little creatures are more intelligent than we give them credit for. If Findhorn could do apparent miracles with their far northerly latitude on scraggly sand and compost, with big buckets of love, I could surely make some successes out of our well composted clay soil and ample Oregon water. 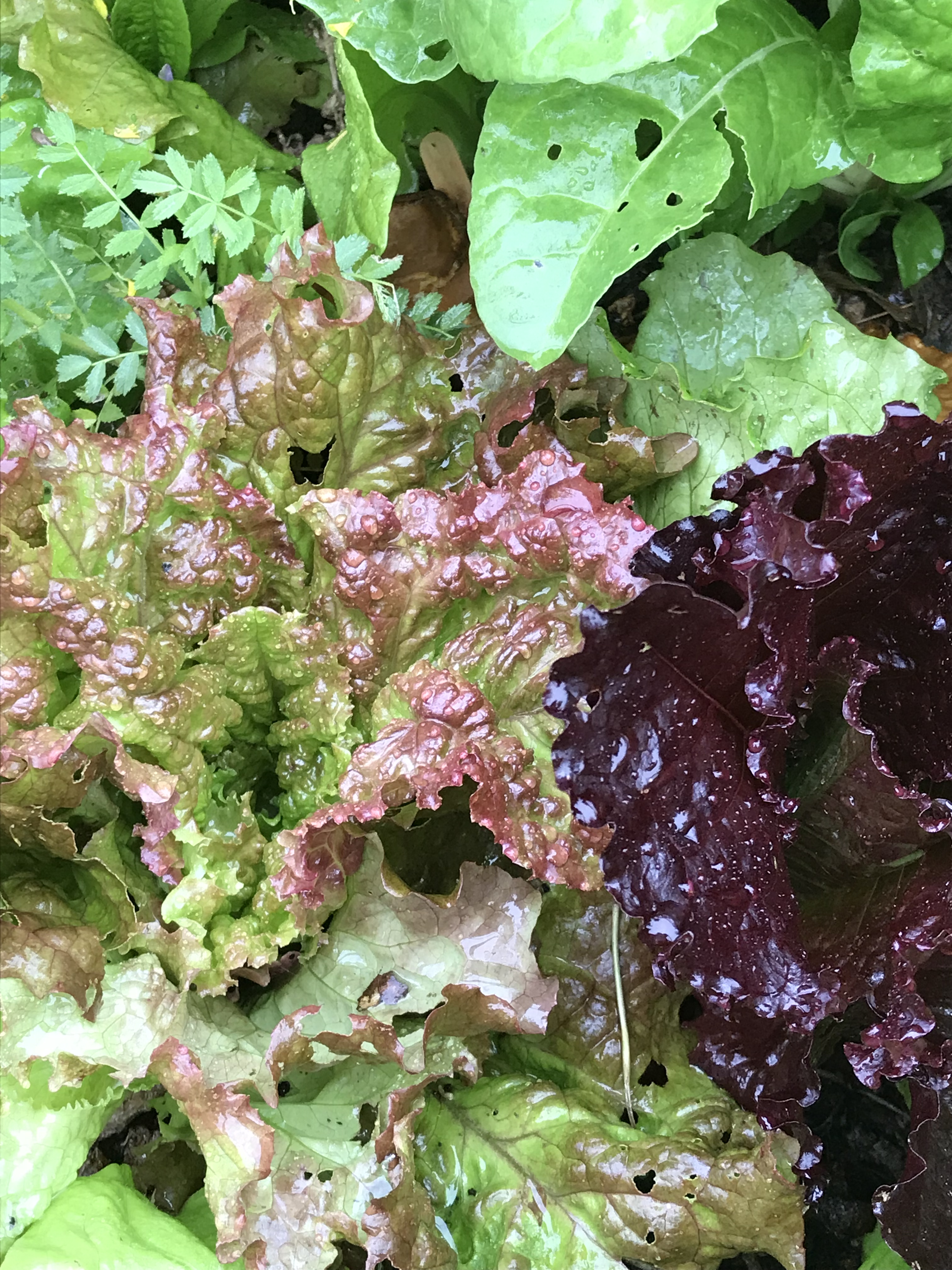 It wasn’t a scientific experiment. I tuned into the tranquility of green things growing, the spaces between soil particles holding honorable intentions, the casual intertwining of pea tendrils with weeds like a lover’s caress. I meditated and sent them love, while the breeze stirred the adventurous squash leaves, draping over the landscape as a by-product of more productive uses of the garden. The garden grew and grew and grew, until it was the envy of neighboring gardeners.

Talking to Plants, Soil,….and Insects, Too?

Talking to the plants, soil and insects seemed like something I should hide from passersby, given my family’s disdain when I mentioned it. So, I only whispered or spoke quietly from the heart. It seemed natural to me. Meredith objected that they weren’t talking back to her. “Read the Findhorn books,” I retorted. I thought they were written to encourage people to talk to their gardens, and anybody could get the hint. Not so, said Meredith.

A three story Victorian-style home, painted grey with white trim overshadowed our garden in the late afternoon, but I didn’t mind. The elderly lady who lived there became an integral part of my gardening life. When I showed up, It was a signal for Minnie to emerge. We would exchange greetings, get caught up on family news, and share tidbits about gardening. She liked flowers, I liked vegetables. She watered the garden when I was out of town. We shared the garden’s bounty with her. I had a lot to learn from her. From over the fence, she delivered snippets of wisdom or vignettes of mundane events colored and flavored by her life, and then she would return to pruning or weeding. Mostly we would just work in comfortable silence. One day, I was sitting, crosslegged, contemplating the direction to pinch an indeterminate tomato. She remarked, “You’re talking to your plants, aren’t you?”

She caught me off guard. I didn’t want her to think I was batty, and I wasn’t sure if she would read the books. Still, it was better to be truthful. I answered, “Yes, I do.”

“I didn’t know young people still did that. My mother taught me.” Her parents were from the British Isles, where these traditions are kept alive. “I always tell my roses how beautiful they are. I know they like it, they brighten up, just like any one would do with praise.”

Meredith: You Do the Slug Talking, I’ll Do the Dirt Digging

I reported this conversation to Meredith. She didn’t budge. She decided I could do all the talking, and she would do the double digging. She would be careful of the earthworms, and let them know when she was going to disturb the soil, and offer similar courtesies to all the other insects and plants and weeds. But as for knowing when they’re talking back, she left that to me. That summer and fall, the garden answered. We had a bumper harvest of every vegetable we dreamed of, including forty pound Sweet Banana Squash.

The winter of 1978 was very mild, only light frosts. In Portland, this means the slugs over winter very comfortably. After the spring tilling, we planted lettuces, green onions, chard, peas and radishes. The slugs ate everything that sprouted within two weeks. We did another planting. I showered the garden with love, and asked the slugs to take it easy. The slugs enjoyed the love like another spring rain, and ate everything again. We did a third planting. They were still voracious, only we began to call it ruthless. Loving them became a parody, an insincere effort in the face of the evidence that we were sacrificing a lot of labor, seeds and organic fertilizer in order to feed our local slug colonies. All the neighboring garden plots were using slug bait and had 4-6 week old plants, and we just had mud and miserable pea stubbles underneath our hand crafted but empty pea trellises.

I needed help. Three plantings, our favorite spring vegetables, all mowed down to the ground. I knew I was supposed to love the slugs. I alternated pleading with praising. But it was obvious they didn’t love me back. I felt betrayed.

One morning I was talking with my four-plex neighbor. She seemed to think she knew what to do. She asked for a slug. The pale morning sun shone directly onto the one-third inch baby I had placed in her outstretched hand. I was curious, “OK, now how do you love a slug?”

“Do you see how it glistens in the light? And how vulnerable it is, without even a protective shell? And think how it moves, producing from its own body only a thin trail to cushion it from dirt and sharp rocks.” My neighbor held the slug so I could see.

I looked closely, and saw little iridescent rainbows flash off the light brown surface. I gasped. It was exquisite, like a little brown oblong pearl. I had never noticed the beauty of a baby slug before. “It would have more reason to be scared of you than you do of it. Love comes from appreciating them for their own sake, not what we think they ought to be good for.” She sounded just like those books.

Power of Love in a Garden

I thanked her and gently carried the sluglet back to my plot. Newly armed with love, appreciation and desperation, I broadcast a formal announcement: “I am impressed by your feeding talents. You are the experts at getting what you need, and I admire you for that. However, I need to eat, too. If you don’t stop eating our vegetables, I will be forced to use slug bait. And I mean it.” Then I softened as I remembered that tender pearly rainbow baby. “But I would rather not hurt you. I will plant a small section in the corner with your favorite vegetables, if you will leave the rest of our garden alone.”

I did as I promised. They all relocated to their corner, and I have never since needed slug bait. When I moved to another part of town, the slugs immediately knew the contract and only ate from “their” part of the garden. I successfully negotiated or contracted with wireworms, cutworms, ants, snails, mosquitoes, yellow jackets, wasps, and many others, and I thought I had finally learned everything I needed to teach classes, as Meredith was arguing I should do. But I was wrong.

Have You Ever Had Slugs Laugh at You?

One time, I visited a friend in Crescent City, California. As a housewarming present, I carefully planted lettuces for the corner of the garden I was dedicating to slugs. I talked to them with love, and expected them to respond the way our Portland slugs did.

What are the characteristics of coastal climates? They always have mild winters and plenty of rain. Slugs breed very well under these conditions. Just to make sure I got the point, all the slugs, mostly five to seven inches long, emerged from their hiding places and marched in single file out of the garden, with perhaps a tinge of indignation, to let me know they were honoring the contract. That pitiful lettuce plot could never satisfy them. Have you ever seen a slug turn up her nose at tender lettuce? There’s nothing quite like large banana slugs, brown slugs, striped slugs, black slugs, all sliding on a single slime trail, to get away from a newly planted garden, as an answer to the spiritual gardener’s question: What is the sound of ten slugs laughing?

If you want to experience this yourself, try quietly talking to your slugs with love.